A Netflix Original for the ages. But of course, before that it was a story by Kevin Brooks (which I will be reading shortly).

I loved the heck out of this. I'm writing these words as the credits start rolling, that's how excited I am to share it with you. I'm so excited I don't even think I can find the right words to tell you how cool I thought this movie was. Netflix is friggen killing it recently, I'm so gorram impressed.

Ok. As for the overall theme, it was your typical boy meets girl, boy falls in love with girl, girl gets hurt, boy gets superpowers, boy tracks down the people who hurt girl and exacts beautiful revenge.
But it's so much more than just that.

The main character (Tom), while a high school student, thinks outside the box and finds elegant solutions to his complex problems. He still makes silly mistakes, as an human can and will, which adds an element of realism to the whole thing.

I guess trigger warning... the theme of the damage to the girl is a rape. The rape was not shown in any detail, but it is what it is. While that is in progress, the main character runs into her house to say hello, and catches the perps in progress. This leads to him getting shot... in the head... while on the phone with the cops.

He wakes up in the hospital with his grandma holding his hand. The doctor tells him he has fragments of his phone lodged in his brain. Tom asks if it hit any of the important parts... the doctor then says "Being a neurologist, we find all of the brain to be pretty important." I loled...

After getting home, Tom realizes he can accesses electronic devices with only his mind. The movie goes on to showing Tom training himself in hacking, hand to hand combat, and more. He communicates with "girl" (Lucy), to see if she's ok, and to let her know the perps would be getting theirs.
The dilemma rages on as she tells "iBoy", the vigilante attacking the gangs of the burbs, not to continue, to let it go. Tom must choose if he loves Lucy, or loves vengeance.

Soon Tom discovers there's more to it than just gangs beating up nerds and raping girls, there's drug lord undertones and a huge crime circle going on. I'm actually quite pissed, because we never get to know who the main perp is... every time Tom tries to hack his profile, he gets errors, and unknowns... WTF is that about!? I want to know so bad. I want there to be another one. I want Tom to be a superhero, because he totally is... AGH it was so good!

The cyberpunk theme is maintained strongly throughout, and is a fantastic element in the movie. It's so well executed, I'm f*ckin jealous. Dear Netflix, please adopt me as your long lost daughter. I'll write for you endlessly. I love you. Bring my brain to life on the screen T_T

In closing, this movie was so cool, I'm going to watch it again tomorrow. Thanks Mom for chilling with me after my busy work life finally wrapped up. Ugh... I need to figure out how to replicate myself.
Night kiddies...
Posted by Jess D. Astra at 9:39 PM No comments:

Hola kiddies! Months and months ago I was on Author's Row at MileHiCon; my best con so far for networking, sales, and fun. I'm calling out networking in this post because recently I've been chatting with one of the authors (James Hunter) who was near by at MHC and we've struck up conversation about what he's working on, what prospects look like in other genres, etc. These things are vitally important for authors to share with each other, and here's why:
When a market is about to explode, readers are hungry for the genre and consume everything in it too quickly. If demands aren't met, they start looking for the next genre to catch their interest. However, if there is a higher volume of available content, they'll stay in the genre. Proof of that, you can see on Google Trends. 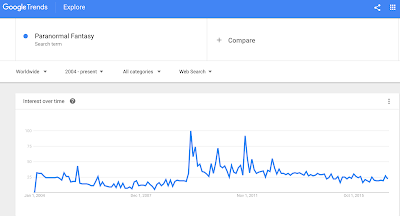 You can see there was a big spike for it in October 2009, and that date we saw a few paranormal fantasy/romance type books come out. However, the author community didn't respond with enough vigor, quickly, and the readership got bored. (I'd also like to call out that Kindle Direct (launched in 2007, not popular until late 2009) and other self-pub/indie-pub options were not as viable as they are now, so that could've hurt the market too.)

Because I wanted to share more of these interesting learnings, here's a light off-topic veer for a second.

Sci-Fi has spikes in November: 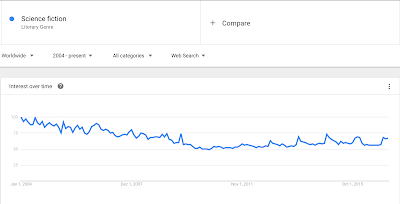 But only just recently when they started figuring out the release cadence, and they've slowed the degradation of the genre readership, possibly even turned it around.

This is a really good thing.

Fantasy has Spikes in September, and is very stable, whereas Urban Fantasy specifically has spikes in August and is tapering off. 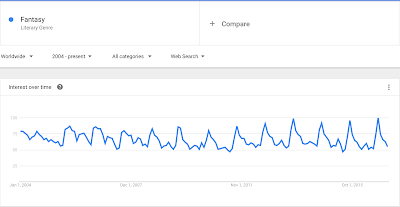 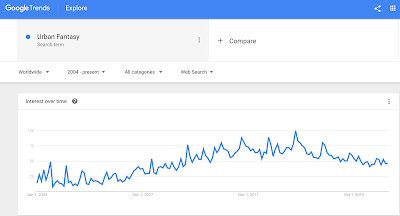 So then, know when I show you this next chart what it could mean for the genre if we don't hop on the bandwagon fast.

Literary Role Playing Game, or LitRPG. James has already written and published his piece for the genre, and it's the best received book he's ever had. Here's the pudding, you find the proof: 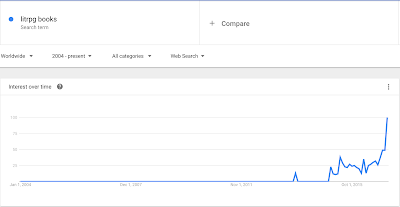 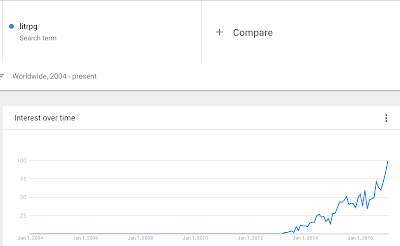 What other graph does this remind you of? Paranormal Fantasy?
Let's not allow that to happen. Rally up, author's. It's time to blow the doors off a new market and bust in there! (but not get her pregnant because that would be rude)


There's obvious data about release cadences, they're structured and planned to keep readers locked in a genre loop, or genre juggling (reading the new stuff from one right as a new one comes out in the next genre).

Alright, enough about that. Next on the docket is Genuine Fans. Though maybe I should've broke this out into multiple posts, because I have plenty more to say on the above (I learned a few things at COSine! Which... I guess I'll blog about next >_>)

I met a gentleman named Vincente at MileHiCon, and he first approached the author next to me. I stood by quietly and allowed my boothmate to chat him up, see if he could make a sale. Vincente mentioned he liked sci-fi (my boothmate had none), which was right about the moment I noticed his SpaceX jacket.
With a little too much enthusiasm I exclaimed in a flurry, "ARE YOU WITH SPACEX?" No, he said, but he liked what they were doing. We discussed the recent launches, and what we were excited for, and then a magical thing happened. He asked me about my only sci-fi book on the stack.
We chatted a bit more and he decided, to my surprise, to buy it. I'm always a little surprised when a male buys my books since they typically feature strong, independent ladies (a girl's gotta have role models... and mentors... but that's another post).
Then another magical thing happened, he, of his own volition, wrote a review on amazon. And not the "It was good, 4 stars" review, but he looked at it critically, and gave (I hope) his honest opinion about it, which included some space for improvement and more research on my end (happening in the next book, promise).
Lots of parenthesis happening in this post.
So, you thought it was as magical as it could get at that last bit, right? Wrong. Turns out Vincente lives near Colorado Springs, which was where COSine is held. Magic and sparkles: he showed up to chat with me about Sway's Demise, and then bought both books in the Verge of Desolation series! It's less sci-fi in the first volume, so I'm hoping it doesn't bore him to death, but vol.2 is most certainly my most polished work so far (except maybe Inamorata which I love to death).
Wow! For the first time ever, someone came to talk to me about my book, and buy more of them because they liked the first! Someone other than my mother or friends, that is. I know it may sound silly for me to be so stoked, but this feels like finally crushing a 4 in bouldering when I've been trapped at 3+/4- for 6 months solid (that happened too, but I rarely talk about climbing, so I guess you guys aren't in the know about how much awesome that was for me =p)
I did it again. Seems like this has gone on for long enough, with way too many parenthesis. I'm off! Peace out kiddies, and thanks, Vincente, for being totally awesome =)
Posted by Jess D. Astra at 9:48 PM 1 comment: