MileHiCon: such a different experience!

Hey hey kids. So, if you follow my posts (which, I'm guessing the only person who reads these are my mom... HI MOM!) you'd know that I did MALCon in August. Well, that was an experience, lemme tell you what. But MileHiCon, holy cow... what a different kind of experience.
As you well know, I was in the vendor room for MALCon, but for MHC, I was on the Author's Row. Here's what I learned: 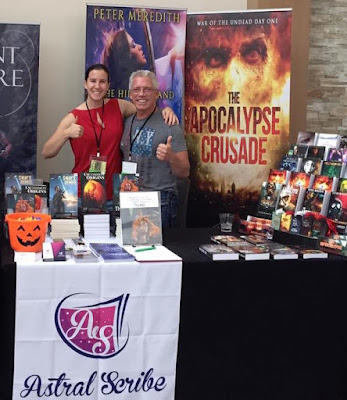 My row was probably one of the best positioned, and it made a huge difference for sales. Unfortunately, my mate and I got trapped in a bit of a corner, and so traffic flow sucked when there was a ton of people. The most important thing to do it respect your mates, because A.) It's the right thing to do, B.) They'll respect you back, C.) You're gonna see these people again... likely at the next con...... and D.) You're all going to have more sales and a better time if you do.
Let me define what I mean by "respect" because it isn't just the courtesy of not farting in your booth space, it's much more.
My mate didn't have any sci-fi in his lineup. It was all zombies, murder thrillers, one military, and one high fantasy. I did not have any zombies, murder thrillers, or high fantasy in my lineup. When either one of us got to chatting with a person, and realized they didn't want to read our genre, we pointed them at the person we knew had what they were looking for. This was good for everyone. Instead of the person saying, "Oh I'm not into that stuff," and walking off, we passed them along to someone they would buy from, and typically they did.
Not only the above, but I had a good fricken time with my mates! We got a little tipsy, laughed, told stories, kept each other entertained during lulls, watched each other's booths when we were away (and even made some sales for each other!) and exchanged really useful information. All in all, this was the best takeaway and the best part, my new friends ^_^

2. Presentation is more than what's on the table... but that matters a lot too

I was not the only author without a mega banner hanging behind my head, but just about. They're not super expensive and they're really friggen cool looking. Get one.
The backs of my books are super boring... The art is cool, because the artist I had for each one was an illustrator, but not particularly awesome graphic designers. I'm a graphic designer (so says my degree), and it's about time I put that to work. Book backs shouldn't just be a wall of text. They need to have flavor, and personality. Because most of the cool illustrations are going on on the front, the back needs something else to keep it intriguing. Spice that shiz up with some InDesign layout awesomeness.
You'd think this one would be a no brainer... but make sure people can actually pick up your stuff and look at it. The first and second days I had my books further back so that all of the free shit (stickers, bookmarks, chapstick, candy, newsletter signup, etc) was all up front and grabbable. Wrong. Fucking. Move. I ended up (due to my mother's prodding) rearranging everything at the end of the second night, and it did result in a better pick-up-and-touch rate for people, but not necessarily a higher purchase rate.
Shiny shit at an angle is hard to see... Glossy book covers look friggen awesome, but gloss makes it invisible when there's reflected light pounding your potential customers in the eyes. Remove one of the three factors (light isn't really doable, so scratch that, two factors): Get some mat books (I have one and it seemed to pull some people in well!), and don't put your glossy stuff at an angle.

I learned from MALCon that I needed to carry tums, advil, and excedrin on me. I totally did that for MHC, but it wasn't enough. My medicine bag needs more... importantly, it needs purell... When you're on author's row, you shake a lot more hands than when you're a merchant. Purell... Purell your fingernails. Purell your wrists. Purell for your eyes sometimes because yes, you will see some shit... 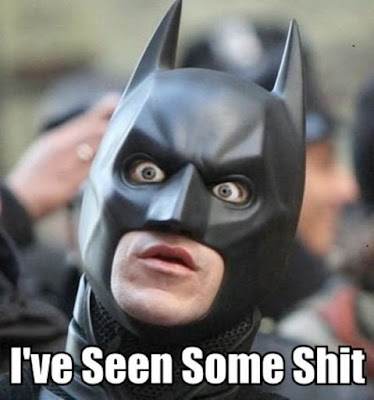 Not really medicine, but medicine for my phone... bring a portable charger (and remember to update your Square software before the con, fortunately I did)
Caffeine and snacks.
Purell...

Another duh moment, but if you don't step outside your comfort zone and flag some people down, you're never going to get a sale. If you don't get any sales, stay positive. There's nothing worse than a whiny little bitch on author's row. I sold least of the other 3 authors in my row, but kept my shit positive (mostly with dry martinis), and stayed upbeat, because I wasn't there to make money. Let's get that clear (wow we're diverging from the topic here). It's not about the money. It's not about the money. Cons are about meeting fellow authors and learning as much as you can from them, meeting fans (or potential new fans), making real connections, and selling a few books, praying the people you sell to will review them (or even read them in the first place).
So, don't sit in your corner and hope people will come to you and ask you what your books are about. They won't. Get off your ass, work up 20 seconds of courage, and say hi to someone. The common phrases we used were "What do you like to read?" or "What do you love in a book?" or even got specific because Stant Litore is fucking amazing and say "The eternal question: Aliens, Zombies, or Tyrannosaurus' in space." That always got a laugh out of people ^_^ Stant is the friggen best.

Alright, this is going too long... here's a few pics. Peace out kiddies. 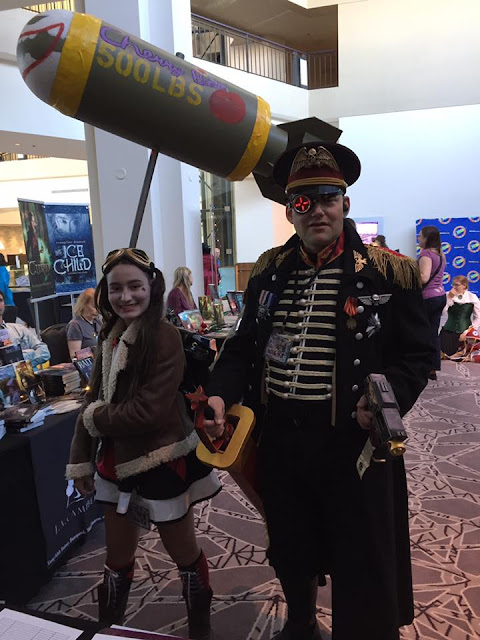 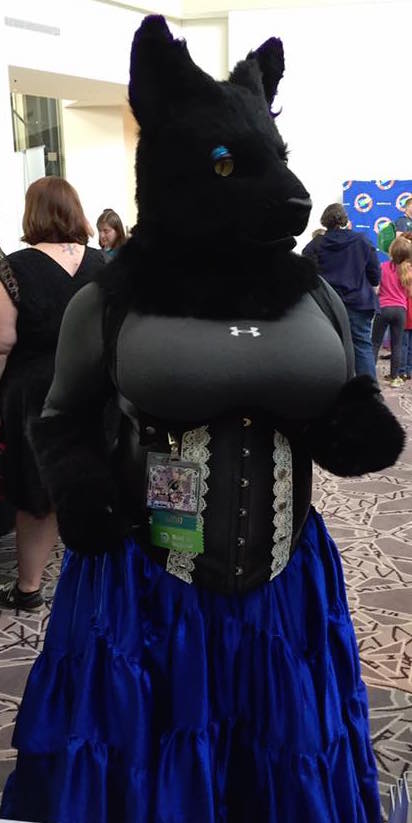 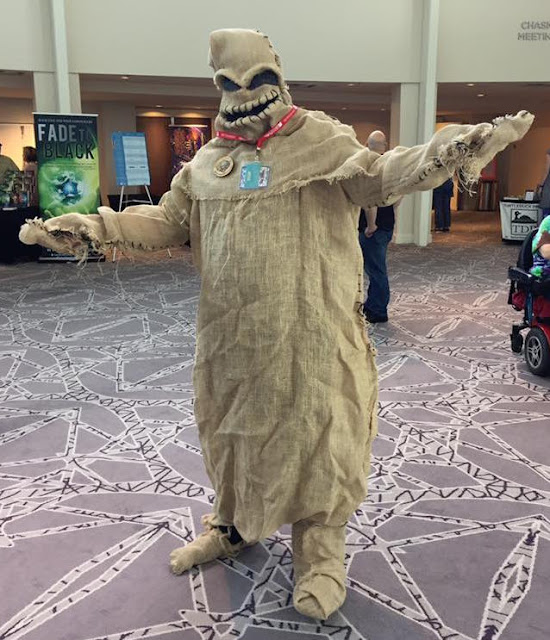 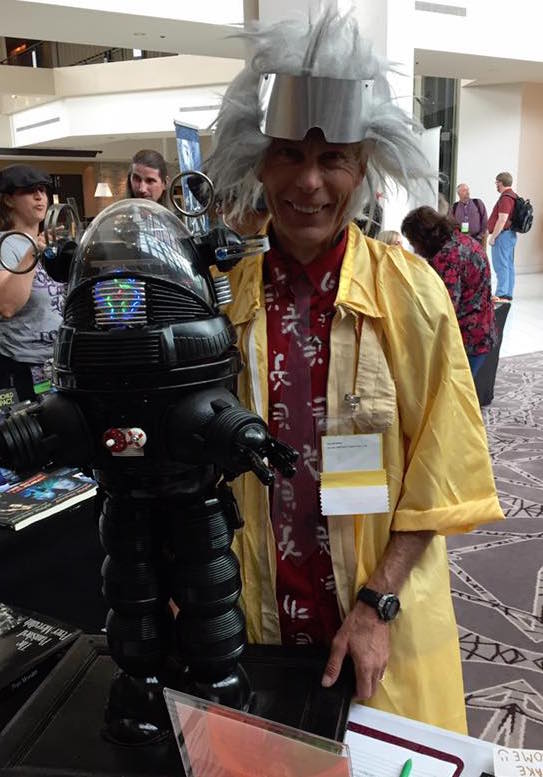