Hey there kiddies! Are you visual writers? 'Cause I totally am. What better to bring an epic movie scene in your head to life than the power of some sick beats, chill ambiance, or a death metal screamfest?
As I write this I'm listening to some pretty chill stuff, but in honesty, I spend most of my time listening to heavy metal, rock, and electronica to write. I feel it helps inspire action scenes, which I'm writing a lot more of recently.
I almost feel as though this is a "duh" post... I mean, if it is, just tap out now, I'm not going to blame you.

So, I've been writing Revolt: 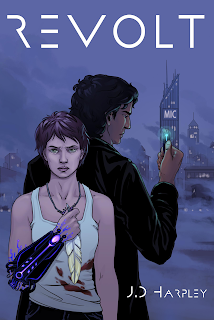 If you can't tell from the cover, it's a bit of cyberpunk, even a bit of adventure, and a whole lot of action. My super slick (and slightly crazy) heroine, Hopper, needs a lot of inspiration to bring to life.
For Revolt I listened to a lot of Celldweller (ok, I won't lie, I always listen to a lot of Celldweller/Scandroid/Circle of Dust), Bring Me The Horizon (Doomed especially, love that song right now), Starset (because space!), and then copious amounts of trance/techno from various artists (my current favs being Seven Lions, Tiesto never leaves the list, and DJ CHEFF ^_^)

I need to get back in the headspace of writing Earth's Peril, because the next book on the list to tackle is Eli's Revenge (tentatively named, I'm really not sure if I'll follow Eli or not. His story on Earth is a bit boring... lots of walking and survival stuff, Vendum telling him how much longer it's going to take and what the other robots around the world are doing etcetc... HOWEVER, Bedelcast's story is interesting as fuck.) That was a long sidetrack. Alright, so I'm a little tipsy... sue me. How I'm going to get back in the headspace of writing the EP series will of course be to read the first book, and then jam out to the same stuff I did when writing it, lots of epic alien and space movies too.

Back to the Duh part of this post from an even longer sidetrack.


1. Identify the mood of your writing

It's important to know what kind of feeling you want your readers to be experiencing when they're consuming your media, because then you can correctly select the tunes to stimulate that atmosphere! Writing a laid back, slow love scene? Probably going to want some Sneaker Pimps. Needing a main character who is about to defy a regime, likely want something mainstream and easy to digest like Five Finger Death Punch. About to go into an epic, final boss type battle; bust out the Apocalytpica.

If one of these components are not like the other, the scene's likely to come out a little janky. Which is fine, I guess. You can always edit later. But I honestly feel if you're not in the headspace to write a certain thing, you should not do it. Lots of author promote the "power through" mentality, which works... but you'll end up wanting to rework it later. I'm rambling... mostly because I, once again, feel like this is duh territory.

3. Lyrics can mess up your flow

I've noticed that some of my best writing comes when I've listened to a song so many times, I know all the words and don't even need to comprehend the lyrics, because I know them, OR when there are no lyrics, OR when the lyrics are in a different language. I've listened to a LOT of Eisbrecher, Megahertz, Oomph!, and Rammstein. But also, a lot of F(x), Boa, and other really silly Korean boy bands.

Welp, that's about as much Duh as I can handle. I hope this was useful for you, or entertaining at least... peace out kiddies.
Posted by Jess D. Astra at 2:00 PM