When sh*t hits the fan: How to adapt to less than stellar situations

As the title states... sometimes the proverbial poop will hit the fan. Or sometimes, the actual poop will hit an actual fan. I've never seen it myself, but I assume it's both terrifying and amusing.

So far on this journey, I haven't had anything go absolutely wrong, but I've had several things take a dump on my day. I'll list them each, and how I went about handling it.

The number one ingredient in overcoming a crappy situation is to stay on target. I know, yes, I'm adding lots of pictures and such.

What do I mean to stay on target? Zoom the f*ck out and remember the end goal. Whatever just happened may be for the best anyway, you'll have no idea unless you zoom out and check what's going on. So. What happened to me.

I was just bumping along, being me and doing me things, when suddenly my madre in law was like "Oh hey, that book that you're about to publish, yeah there's like a blaringly obvious error in it." 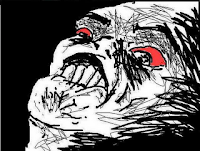 FFFFFFFFFFFFFF..... That was the face I made. Just imagine someone saying "FFFFFFF" really loud and that was my face.
Exhibit C.

Anyway. I'd already ordered a copy and sent it off to a reviewer in the U.K. Much to my embarrassment, I had to inform said reviewer of the error and ask them to ignore it... Yeah, that's pretty damn lamesauce and just doesn't speak to me being any kind of decent writer that I allowed something to be printed with an issue as big as this. We will not discuss what said issue was.
Anyway, how to handle that sh*t.

So, situation #1 covered. Poopy mistake in my debut launch. Zoom out, take a breath, formulate a plan, take action. Never, never, get angry at yourself or anyone else. It will do you absolutely no good.

Poop #2. I paid quite a little sum of money for a magazine placement, and a web banner on their website. They will remain nameless for their protection... but my goodness. My rep said her team worked on the ad over the weekend because they were so slammed. 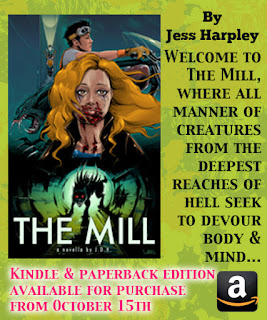 It looks like she worked on my banner ad in MS paint for 2 minutes. Like, dear lord in heaven, WHAT HAPPENED?! (interrobang!)

"Ok, how about a kind of fall-ish background, with some orange and green leaf looking things... yeah... then we'll slap the book over on there, add two different type faces, neither of which match the font used on the book cover. Good, good. Ok now what..? Yeah let's have the text super close to the edge, and to the image. And OOOH! Let's make it pinkish red with a WHITE OUTER GLOW! That, is f*ckin snazzy. I'm so tits at this."

I'm so sorry magazine rep, if you read this, but I am an art student, and this is just not acceptable. Though I could have fixed it myself, I decided to go to my artist for help. So here's how we handle situation #2

Again, don't get mad. Anger does nobody any good.
It's totally possible they were so completely slammed that my rep had to do it themselves, and this was the best they could do. I didn't get angry and let them know how unacceptable it was, I just took a breath and let them know "My artist wants to take a stab at it." Seemed to all work out OK on that end, because they provided me with all the details I needed to get it done myself.